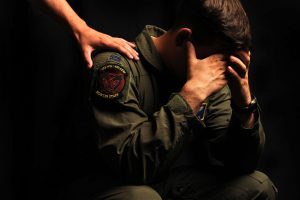 The problem is that an estimated 80% of those experiencing mental disorders will not seek help or will give up quickly and thereby not only affecting their own lives, but also those around them. Therefore we require easy-to-follow processes that can actually help people to treat themselves. They must be fast and effective, so that one can do so themselves and must elevate the disorder for good (not just helping them to cope).

Beverley Searle is a counsellor who studied social sciences at university for nine years, qualified in healing methods and researched the issues of anxiety, depression and post-traumatic stress disorder for 15 years. She developed such drug-free, gentle but powerful mental healing techniques and worked   with hundreds of people and organizations. Evidence-based research has demonstrated beyond doubt that people can overcome any form of stress, trauma and the opportunity to escape addictions using such techniques. The challenged person is not only able to lead a constructive life, but also feel SAFE and HAPPY again.

Throughout her childhood in South Australia Beverley experienced horrendous child abuse by her paternal grandfather, who was a member of a satanic sect and used Beverley and her sister in their satanic rituals. In her autobiography “We into I – Parallel Lives” Beverley describes how this sect, that included dentists, doctors and other people of high social status (Beverley’s grandfather was a minister of the church), performed ritual murders, torture and sexual abuse on children. These continual traumas, which lasted for many years, caused Beverley to go through lengthy psychological treatments which proved to be more harmful than beneficial. They were costly, they included drugs that caused more harm than good, and in one occasion one psychologist announced that Beverley’s mental issues stemmed from physiological causes and not from traumas. “I knew that this was not true”’ says Beverley, “and that’s what brought me to research this subject very thoroughly and come up with my healing techniques”.

The “Your Envisioned Mind” technique is an eight step formula which integrates three major theories:-

The first four steps are meant to free you from old subconscious responses and heal your emotional wounds and dysfunctional reactions. This simple process can be used to generate a new foundation for your life.

The technique was originally named “Forget Talking Therapy”, as it is based on visualisation, which is a lot more effective than the conventional talking therapy. “The sub conscience, which is responsible for 80% of our decisions, beliefs and values”, says Beverley, “is effected by visions, not by language. If you change the pictures in your sub conscience, you change your reactions and your ideas about past experiences. That is why it is more effective than talking therapy and can heal a person by ten session at the most.” Needless to say, the doctors and psychiatrists are not fond of this technique, as it is a lot shorter and more effective than the traditional therapy. Beverley is now in the process of writing a book called “What the Doctors Don’t want you to Know about Depression” (a sequence to her previous book – “What the Doctors Don’t want you to know about Anorexia”).

The organisation “Your Envisioned Mind” was founded by Beverley together with her business manager, Wim Ooms, who looks after the administration and the marketing of the organisation, which is supported by the Janrua Foundation. This foundation is meant to stop the onslaught of mental health illnesses. “Because YOU were not created to live depressed, guilty, ashamed, condemned, or unworthy”, says Beverley, “YOU were created to be victorious! NO ONE is ever too broken, too scared or too far-gone. Don’t give up and don’t lose faith, because so far we have cured on average 93.7% of our clients for good in just a few weeks!”

For a free consultation session contact Leah Zartz on 0402 590 963, or by email: leah.zartz@gmail.com

Previous Post: Talking Therapy – Why Is It not Working?
Next Post: Emotional Intelligence – Intelligence Exists not only in the Brain!